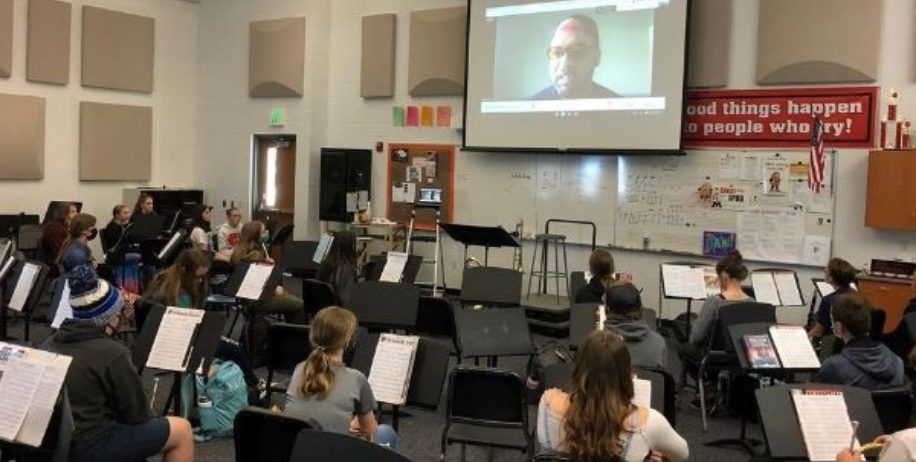 Years in the Making: MHS Band Plays Commissioned Piece for the First Time in Concert

Dozens of instruments flooded the Moorhead High School auditorium, filling the room with sweet melodies. Students performed a commissioned piece that has been three years in the making. It was a special night, freshman band students played Clay County Overture with composer Darryl Johnson II. It was the first time they met him in person and performed the piece, but years of work have gone into making this moment a reality.

Tim Pipinich, Horizon Middle School band director, has seen his students through this entire process. Although it didn’t go exactly as planned, there was never a doubt that he would make this happen in some form. “I had times in 2020 when I questioned if groups of this size would ever perform together again,” Pipinich said. “It’s awesome that students saw this through. They didn’t quit the band and they stuck with it even when there was a lot of uncertainty.”

This was the first time Pipinich had commissioned a piece of music. This was possible through grant funding from Lake Agassiz Concert Band and Moorhead Legacy Education Foundation. The process was eye-opening for students. Not only did students get to collaborate in making the piece, they also got to learn about composing as a career option.

Celebrating our regional heritage, Clay County Overture highlights what makes our community unique and connected. Student ideas shaped what the commission would be about and included favorite things about our area like nature and ice cream treats at iconic places like Moorhead DQ and the Freez. The piece is divided into three sections: Red River Rushing, Sweets and Treats and Viking Thunder.

The composer researched and talked with students to truly understand our community. Upon hearing the piece for the first time, Pipinich was thrilled. The composer had nailed what Moorhead is about. “I don’t think there are many places that people line up around the block in the middle of winter on March 1 to get ice cream,” Pipinch explains through a laugh. “We wanted to capture those unique moments that make our community who we are.”

Through collaboration and determination, Pipinich and his students made it to the premiere night. On March 24, years after the journey began, the moment they had been waiting for became a reality. Now in ninth grade, the students performed the special piece for an audience for the first time, a year later than expected. But the wait made the moment that much sweeter. As the applause rang out in the auditorium, students proudly stood, soaking in the moment.