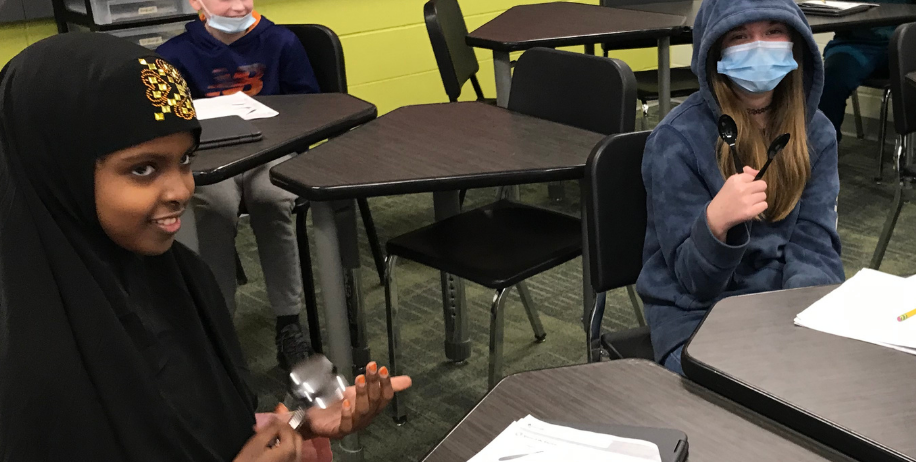 Students play their spoons and the metallic taps fill the music room. Horizon Middle School students are learning about the important role of spoons in African American music. This lesson is a part of Joe Lindquist’s Black History Month unit in exploratory music class.

Like most teachers, Lindquist says, “Part of my teaching DNA is making a difference in the world.” Black History Month allows for open discussion with students about ways to dismantle racism.

Lindquist wanted to do more to connect his students to music and Black History. “This unit opens a deeper discussion to things that are hard to talk about, but important,” Lindquist says. “Kids really dig into the conversations and it’s meaningful to them.”  Last year, he found resources available to him through the National Museum of African American Music and Quaver Music. The museum’s mission is to educate the world, preserve the legacy and celebrate the central role that African Americans play in creating the American soundtrack.

The lessons offer a historical perspective on important musical instruments, including spoons and banjos. According to the museum, playing spoons is one of the oldest forms of music, in fact prehistoric drawings show people playing a form of the spoons. They were widely used as musical instruments because they were inexpensive household items.

Lindquist has taught for over 14 years, two of those at Moorhead Area Public Schools. “I love working with middle school students; they have such a goofy sense of humor,” Lindquist says. “I also have a special heart for them, because of my own experiences as a middle school student and some of the struggles I had.”

Music is a fundamental part of life. Lindquist believes that the more you understand music, the more you enjoy it as a listener. Practicing music is a complex skill that involves many areas of your brain working at the same time. Lindquist explains, when students play an instrument and read music at the same time they are teaching themselves several skills. They are moving their bodies, listening, decoding music notes and, if playing together as a group, learning teamwork.

In addition to the Black History Month unit, Lindquist and his co-workers plan interactive content throughout the year. Lindquist works with fellow music teachers Kira Degerness, Madison Wilts and Nicole Rumppe to provide hands-on experiences for students to explore all aspects of music. This includes a unit on music production, which allows students to create and edit music using loops, samples and effects. “I like to show students the possible careers in music,” Lindquist says. “They have the opportunity to learn a skill that could turn into a career for themselves in the future.”