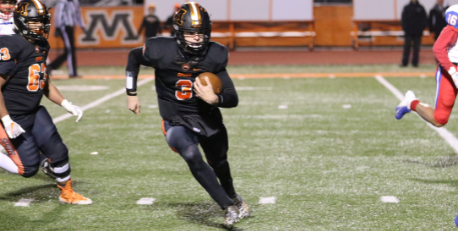 CHICAGO (May 13, 2021) — In its 36th year of honoring the nation’s best high school athletes, Gatorade today announced Trey Feeney of Moorhead High School as its 2020-21 Gatorade Minnesota Football Player of the Year. Feeney is the second Gatorade Minnesota Football Player of the Year to be chosen from Moorhead High School.
The award, which recognizes not only outstanding athletic excellence, but also high standards of academic achievement and exemplary character demonstrated on and off the field, distinguishes Feeney as Minnesota’s best high school football player. Now a finalist for the prestigious Gatorade National Football Player of the Year award to be announced in May, Feeney joins an elite group of past state football award-winners, including Emmitt Smith (1986-87, Escambia High School, Fla.), Matthew Stafford (2005-06, Highland Park High School, Texas) and Christian McCaffrey (2012-13 & 2013-14, Valor Christian High School, Colo.).

The 6-foot-2, 196-pound senior quarterback led the Spuds to a 7-0 record and the Section 8AAAAA tournament championship game before the season was cancelled due to pandemic concerns. Feeney passed for 1,965 yards and 36 touchdowns and threw just one interception. In his team’s final game of 2020, Feeney passed for seven TDs and rushed for two more in Moorhead’s 63-7 win over Alexandria High. Feeney’s father, Kevin, was the 1993-94 North Dakota Gatorade Football Player of the Year. Feeney’s uncle and two cousins are also previous Gatorade football and basketball winners in North Dakota. He concluded his prep football career with 6,891 yards and 85 TD passes.

A member of the Moorhead High Unity Council, Feeney has volunteered locally as part of a youth literacy outreach program and as a middle school tutor. He has also donated his time to the Special Olympics and as a youth football coach. “Trey is an exceptional quarterback,” said Mike Empting, head coach of Alexandria High. “Trey’s biggest strength is that he’s a smart player. He always had his offense in the best position to be successful on any given play.”

Feeney has maintained a 3.85 GPA in the classroom. He has signed a National Letter of Intent to play football on scholarship at the University of North Dakota this fall.

Through Gatorade’s cause marketing platform “Play it Forward,” Feeney has the opportunity to award a $1,000 grant to a local or national youth sports organization of their choosing. Feeney is also eligible to submit a 30-second video explaining why the organization they chose is deserving of one of twelve $10,000 spotlight grants, which will be announced throughout the year. To date, Gatorade Player of the Year winners’ grants have totaled more than $2.7 million across 1,117 organizations.

Since the program’s inception in 1985, Gatorade Player of the Year award recipients have won hundreds of professional and college championships, and many have also turned into pillars in their communities, becoming coaches, business owners and educators.

To learn more about the Gatorade Player of the Year program, check out past winners or to nominate student-athletes, visit playeroftheyear.gatorade.com, on Facebook at facebook.com/GatoradePOY or follow us on Twitter at twitter.com/Gatorade.