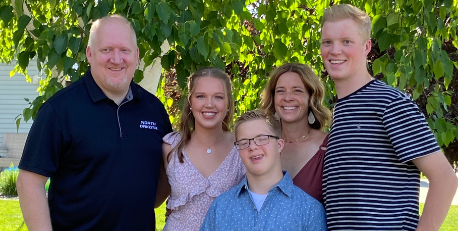 Kristin Peters believes anything is possible. From Bismarck, N.D., Peters joined the Moorhead Area Public School’s team in 2009. She works as a Physical Therapist in the schools. Her journey here evolved from life circumstances she never planned for.

Peters moved to the F-M area in 2001 with her husband, Scott, and 18-month-old son, Zach. She began working at Meritcare Southpointe in outpatient therapy. During her time there, she wrote a grant that started the Women’s Health Program. Soon after moving, the family grew with the addition of daughter Erica. Fast forward six years, and they welcomed the final addition into their family, Jake.

“You never know where your journey will take you,” reflects Peters. Jake was born in January 2007 with Down syndrome. “When Jake was born, our world was turned upside down,” she says. Although Jake didn’t have major health issues, he did have chronic issues that affected her work schedule. She saw a position open at Moorhead Area Public Schools and knew it would fit her families’ scheduling needs better. Peters has worked for the school district for over 11 years now.

Jake, 14, is currently an 8th grader. Peters experiences with her son have shaped her outlook on life. “It’s a mission of mine to promote inclusion and I have a real passion for not setting limitations,” Peters says. She is always working to figure out how she can provide opportunities for her son and her students. “I find whatever modifications I can to reach goals.”

Peters remembers a student she worked with several years ago. The student was in third grade and had never walked before. She asked why and proposed to teammates that she was going to help this student walk. "My co-workers were supportive, but I think they thought I was crazy,"  Peter says. Through adaptive methods and hard work, Peters saw that student walk for the first time ever. “It was amazing to see and show what could happen when you don’t limit someone,” she says.

She is also involved in many outside organizations like: Red River AMBUCS, Gigi’s Playhouse, and Moorhead Park District adaptive sports programs. “It’s honestly daily advocacy for my son and our students,” says Peters.

After both of her older children went to college, Peters was ready to invest more time and follow her passion to help others achieve their goals. She worked with Rachel Olson of Interact Therapy to bring the national organization AMBUCS to the Red River Valley. Red River AMBUCS is a non-profit that inspires mobility and independence by providing Amtryke Adaptive trykes for people with disabilities.

The local chapter incorporated in November and helped their first recipient in February.

Moorhead High School student Ausama was the first recipient. He received an Amtryke after months of planning and fittings. Peters, who was his physical therapist in elementary school, saw Ausama's first time on the tryke. With tears in her eyes, she witnessed the impact her work, with the help of so many others, had on her former student. Ausama said it was the best day he has had in his life so far.

Watch a short video of Ausama below.

Nobody can limit your capabilities. Kristin Peters is an example of that; so is her son Jake, and the hundreds of students Peters has helped reach their goals regardless of ability.