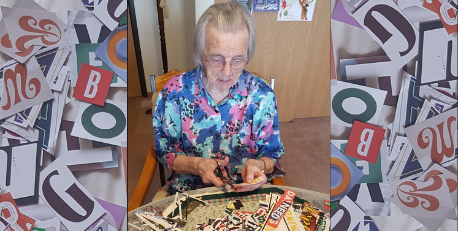 Erna Eitzen's Gift to Her Community

Erna Eitzen, age 95, sits at her table looking through old magazines and publications for letters to cut out. These letters, cut and sorted by Eitzen, would later be used by students at Robert Asp Elementary school to create art projects. With such a unique connection between a community member and the young Moorhead school artists, it is no surprise that there is an interesting story behind it.

Throughout her life, Eitzen has always had heart and passion for helping children. She spent most of her adult life in Munich, N.D. with her husband Alfred. For over 20 years she worked as a cook at Munich Public Schools. She also taught children’s Sunday school classes at her home church. She believes in working hard and serving others and has faith that it would bring blessings one's way.

Eitzen moved to the Fargo-Moorhead area after her husband passed away and quickly found ways to help others in her new community. Eitzen would spend her time cooking and baking items to give to others. She also used her sewing machine to sew hundreds of dresses. These dresses, made from recycled fabric and pillow cases, would be sent to underprivileged children across the world. Eitzen’s heart knows no boundaries; giving is what she loves to do.

As she entered her 90s, Eitzen realized that many of the ways she had been helping others were no longer things she could do. Her daughter, Treva Watnemo, a paraprofessional at Moorhead Area Public Schools, had an idea. She connected with Michelle Sailer, an art teacher in the district, who likes to use recycled letters cut out of magazines for student projects. Watnemo pitched the idea to her mom, Eitzen was ready to help.

Eitzen has always been a creative recycler throughout her life, so the idea of cutting the letters out of magazines for a useful purpose before getting rid of them seemed like a great idea. She perseveres through her age and continues to cut and sort. She cuts all sorts of letters from fancy, colorful letters to simple, bold ones. She will cut them at her kitchen table, on her couch and in her recliner. This is a known fact because when Eitzen moved apartments recently, little paper letters sprinkled out from her cushions!

Both Eitzen and her family are grateful to Sailer for giving her this opportunity. Watnemo says, “It gives mom purpose and meaning to her days during this inactive part of her life. It makes her feel needed!”

The letters are appreciated by not only the art teacher, but the students as well. Sailer says, “Many students ask if they can keep extra beautiful letters they find when they are searching for the perfect fit.”

This connection brings happiness to both the children at Robert Asp Elementary and Eitzen. Watnemo says, “When she gets thank you notes from Mrs. Sailer and sees the notecards children have made with the letters she has cut, it brings a smile to her face.”

Eitzen’s response to this amazing connection between herself and the young artists at Moorhead Schools was just as expected. Eitzen says, "I am just glad I can still help someone."