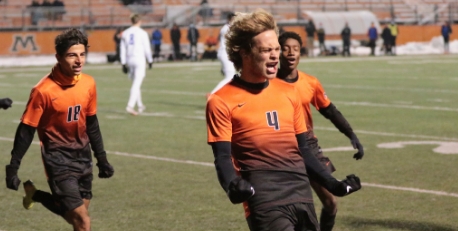 A fast-paced match, a successful Friday night, the end of a season and a championship win. The Spuds had another successful week in sports.

Volleyball traveled to St. Cloud Tech on Oct. 22 to take on the Tigers. Spuds scored 25-17, 25-12, 25-16 to win over St. Cloud Tech. Sam Zimmerman was hot for the Spuds leading the team with six blocks and nine kills. Rosie Anderson added six kills of her own, and Anna Knain tallied 17 assists. Willow Carrier led the Spuds with 16 digs. There were six aces scored by Moorhead. Two each by Zimmerman, Knain and Carrier.

After postponing their matchup because of snowy travel conditions, Moorhead hosted Willmar at home on Oct. 24. Moorhead lost 20-25, 18-25, 17-25. Zimmerman led the Spuds with nine kills and Anderson added seven. Carleigh Vedder had 16 digs and Carrier added 15. Alexa Gronwold added 15 assists for the Spuds. The Spuds are 3-2 on the season. 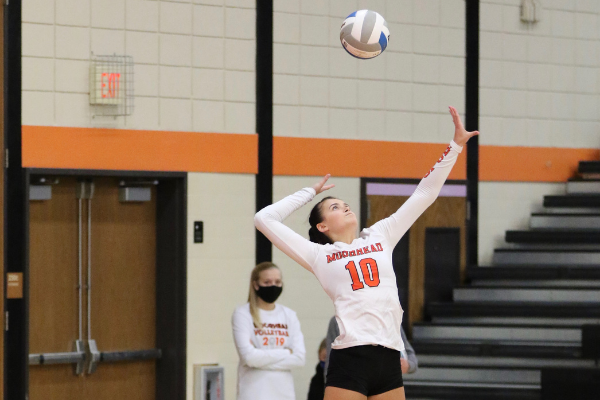 Quarterback Trey Feeney led the Spuds to their third win. The Spuds football team played against Sartell - St. Stephens at St Cloud Tech on Oct. 23. Feeney completed 20 of 30 passes totaling 321 yards and six touchdowns. In the first quarter, Feeney hit Brady Walthall on a 52-yard pass and then again on a 39-yard pass for touchdowns. In the second quarter, Blake Walthall caught a 28-yard pass for a touchdown. After the Sabers scored on the only interception of Feeney this season, the quarterback found Brady Walthall, again for a 36-yard pass and another Spud touchdown. To start the third quarter, George Nyanforh rushed for 12 of his 41 yards into the end zone to score for the Spuds. Brady Walthall caught touchdowns number four and five for 12 yards and 36 yards respectively and for a total of 12 receptions and 244 yards. Sophomore quarterback Gavin Quade found Michael Haugo on a 24-yard reception and the Spuds final touchdown, in the fourth quarter. Kicker Saif Allawi had nine kickoffs totaling 516 yards, the longest being 60 yards, and scored six PATs. Ellie Feeney scored two PATs. The Sabers scored on the final play of the game but were unsuccessful at their two-point conversion.

Defensively, Jackson Gotta had four tackles and an assist for the Spuds. Jamal Dixon and Jack Teiken each had three tackles and Austin Altepeter was in on three tackles. Spuds won 56-12.  Moorhead has outscored their opponents 154-18 in three games and is 3-0 on the season.

Moorhead will next play Rogers at Monticello on Oct. 30 at 7 p.m. 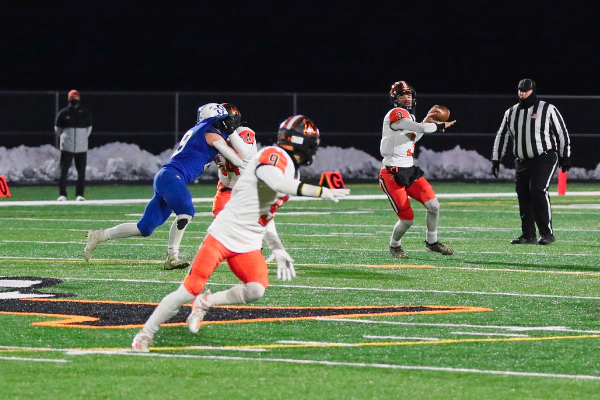 The Moorhead boys soccer team headed to section finals after beating Brainerd at their home game on Oct. 21. This final season matchup ended in a 2-2 tie. Both teams battled the elements and each other in the below-freezing weather. After a scoreless first half, the Spuds scored when Max Hodny lobbed a corner kick towards a crowd of players in front of the net. Spud center Liam Weiler out jumped the Brainerd defense and sent a header into the net to score the only goal of the game, seventeen minutes into the second half. The goal pumped up the Spuds and they were able to defend the goal as the Brainerd Warriors tried to even the score. Goalie Jacob Hendrickson saved many Warrior goal attempts. Alongside the Spud defense, the team worked together for the win.

Moorhead brought their undefeated record of 11-0-1 to Maple Grove on Oct. 24 in hopes of revenging their loss to the Crimson in last year’s semi-final section game. Moorhead started fast, but No. 1 seeded Maple Grove powered on, controlling most of the first half. Spuds goalie Jacob Hendrickson got a workout blocking and saving multiple shots in the scoreless first half. The Crimson kept up the momentum in the second half scoring ten minutes into play and then again with only 17 minutes remaining. The Spuds went down, 0-2 but held their heads high, grateful for the fact they got to play the season and happy to make it to the final game, as there is no State Tournament for soccer in this pandemic year. Moorhead allowed only eight goals for the year. The team broke records as the first boys soccer team in Spud history to go undefeated in the regular season. 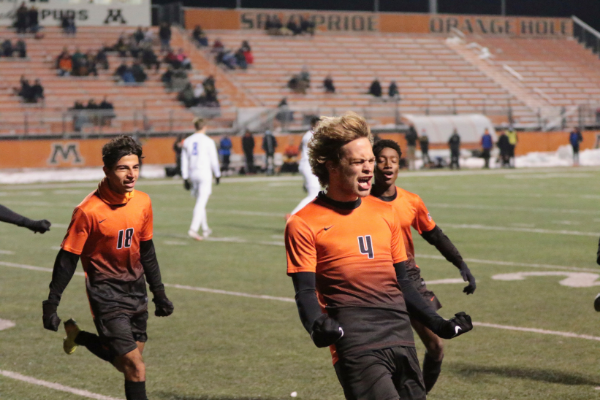 Liam Weiler celebrates after sending a header into the net to score the only goal of the Oct. 21 game against Brainerd. Photo credit: Renee Grover.

Moorhead placed first and edged out Buffalo by half a point for the team competition. This was their last meet of the season as there will not be a state competition this year. Congratulations, Spuds! 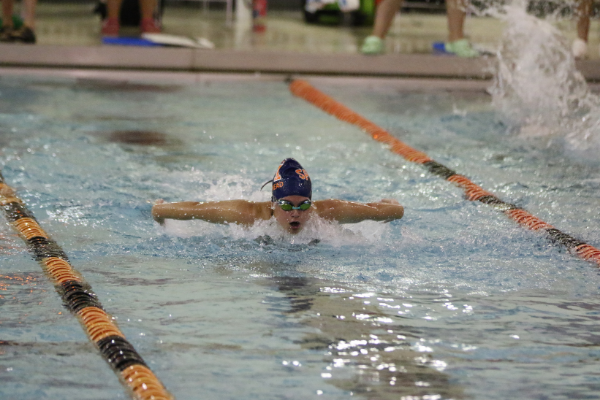 Alayna Janke took first place in the 100 Butterfly with a time of 59.06. Photo credit: Renee Grover.

Spud activity highlights is a weekly feature to keep you up to date on the latest Spud news!