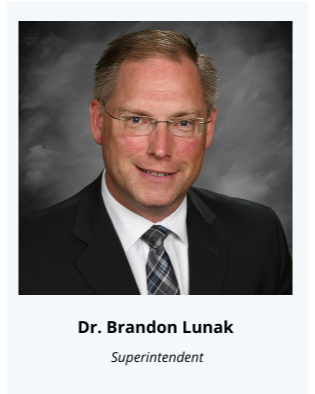 A Grand Forks, N.D., native, Lunak earned a bachelor’s and master’s degree from the University of North Dakota and a K-12 principal and superintendent’s license as well as a doctoral degree in educational leadership from Minnesota State University Moorhead.

Lunak taught physical education and health for Climax-Shelly School District in Climax, Minn., from 1997-2005. He was the superintendent/elementary principal in the Emerado Public School District in Emerado, N.D., from 2005-2011. There he led the district through an HVAC upgrade that was partially financed with a grant for energy efficiency.

From 2011-14, Lunak was superintendent of the Waubun-Ogema-White Earth Public Schools, where he led the district through the construction of a preschool addition to the elementary site with the help of a grant through the Minnesota Department of Health and Human Rights Services.

Brandon and his wife, Melissa, reside in Moorhead and have two children, Brycen and Azylen.

Every day, teachers, support staff, administrators and volunteers come to school prepared to provide the best possible learning experiences for Spud students. Not only do we work together to help students learn, but we also provide a safe, nurturing place for them to grow. I am grateful to be a part of this amazing organization and outstanding community. Thank you staff, students, parents and community for what you do to make this a warm, inviting place for kids to thrive.