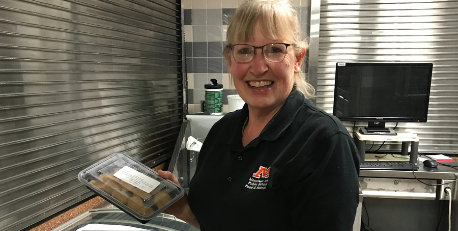 Throughout the month of March, Moorhead High School's food and nutrition services team repacked leftover meals and distributed them to students through Moorhead High School. Over 13 meals a day were repackaged, for a total of 193 meals during the course of the pilot program.

In an effort to eliminate food waste, remaining menu items were packaged in microwave-safe containers donated by Power Plate Meals. The portioned meals were cooled, labelled, and frozen before their final delivery. A total of 193 servings were repackaged and 103 were claimed by the last day of the pilot program. Meals can be distributed up to 90 days after packed, if they stay continuously frozen. The food and nutrition services team will continue to distribute for 90 days, or until the meals are gone. 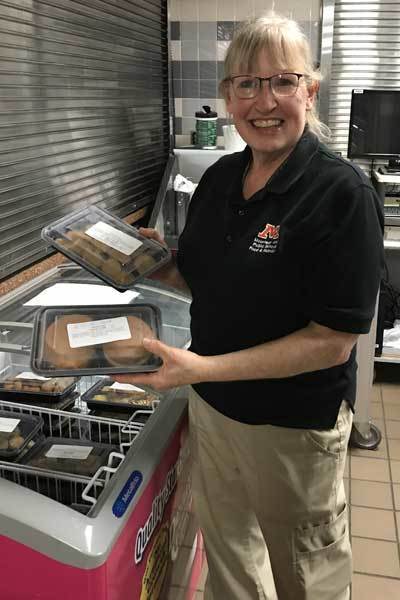 Cindy Noennig shows off some of the leftover frozen meals.

"We got really positive feedback from families, indicating they were extremely grateful for the food and that it was used immediately," Waldron says. In addition, he appreciated the connections he was able to make with students. "Personal connections for everybody have been sparse during this pandemic, and this was a good opportunity to interact with these students in a positive way," he says.

As two of the pilot’s community partners, the Great Plains Food Bank and United Way of Cass-Clay collected data from the three participating school districts (Moorhead, Fargo and West Fargo) over the course of the four weeks and is now evaluating it to determine the pilot’s reach and impact on the entire community.